Home | The Cloud Wars Have A New Warrior 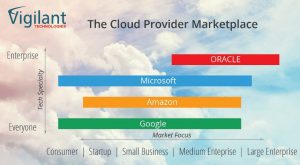 Cloud computing hit the market in 2006 and things haven’t been the same since. Between the top three platforms – AWS, Azure and GCP – the cloud has been the landscape of a never-ending battle. Now comes Oracle with plans to disrupt the wars.

As the longtime data management leader, Oracle is not accustomed to following. This time is no exception. The new Oracle Cloud Infrastructure (OCI) may not register for many enterprise shoppers. But Oracle has big plans to take over on two customer priorities: speed and price.

How does the second-gen Oracle Cloud measure up?

Larry Ellison, Oracle’s CTO, puts it this way: “You come to our cloud, you get Exadata infrastructure, autonomous database, everything is automated, and you get really, really low cost. More importantly, there’s no labor, there’s no human labor or error, there’s no downtime. Your developers are more productive. They get more projects to market. If you want all of those benefits, you’ve got to be willing to pay less. We are infinitely faster and infinitely cheaper.”

Oracle has spent some time watching the cloud mature as the adoption rate has slowed bit – from over 20 percent until this year to a healthy and steady 17 percent. This new pace is giving enterprises a chance to think about what they learned and what they need from cloud-based services.

Amazon Web Services (AWS) is the undisputed leader with 43% of the public cloud market share. It is valued for its flexibility, scalability and reliability. AWS allows enterprises to choose the geographic region in which most of its customers work and play and live. It also gives enterprises the ability to select two availability zones or datacenters. All of this makes the system more responsive in terms of computing times

AWS advantages: Dominant market position; extensive and mature offerings; support for large organizations; extensive training; global Reach. However, it has its disadvantages, too: Difficult to use; cost management; overwhelming number of options.

Microsoft Azure was designed to be easily integrated and synced with existing omnipresent Microsoft products like MS Office. This synchronization is useful in services like Cloud Migration.

Its disadvantages are described as less “enterprise-ready” than other computing cloud platforms and incomplete management tooling.

Google Cloud Platform (GCP)is, arguably, best for companies that need to compute and process huge amounts of data frequently. It specializes in big data and networking speed. Google offers services like G Suite, Google Map, Gmail, YouTube and of course the search engine service. These are among the best such services available and have users in the billions.

But for Google that’s not been enough. In last 15 years, Google has worked on its infrastructure. Today, it boasts a huge and secure network.

Back to Oracle where the company says their cloud offerings come from experience.

Oracle Sharpens its Tools for Battle

This past decade of watching public cloud growth, and all these benefits and challenges, has in many ways enabled Oracle, an acknowledged latecomer to the cloud market, to devise a battle plan for a new era of cloud.

A long-time leader in databases and applications, Oracle jumps into the cloud market with an enterprise-grade solution that addresses many of the challenges on the cloud.

Oracle considers itself a disrupter in the much the same way iPod was to the Walkman and the CD was to the floppy disk. In addition to its progressive new autonomous and AI-features, Oracle Cloud Infrastructure also has a library of practical tools that simplify cloud migration for the largest enterprises, especially those already running Oracle business applications.