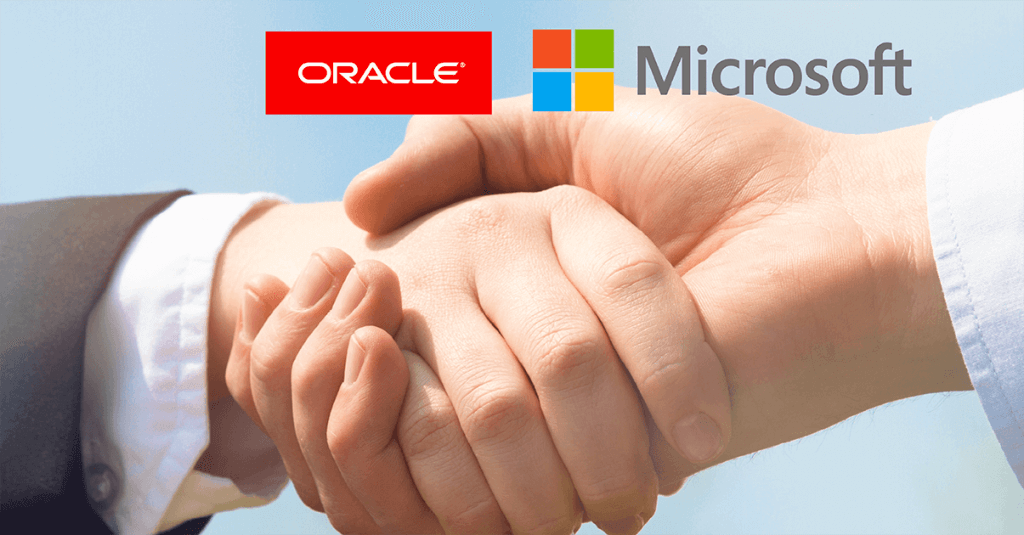 The Bold Microsoft And Oracle Cloud Partnership Allows Two Longtime Enterprise IT Leaders To Lock Their Leadership In Place, Bolster Against Rivals And Simplify Data Management For Companies Around The World

On June 5, Oracle and Microsoft made an announcement that will impact nearly every major enterprise around the globe as businesses continue their digital transformations — with data growth and consumption exploding at virus-like levels now and for the foreseeable future.

CIOs and IT departments expressed surprise and joy over the announcement. On Twitter, “Wow” was the word of the day among insiders. “Hell freezes over” is how one German tech journalist put it. Tech Crunch called it “relatively unusual.”

Here in the fast-growing offices of Vigilant Technologies, where we partner with both Oracle and Microsoft, there was absolute excitement at the possibilities, as we’ve understood the complementary nature of these companies for years. 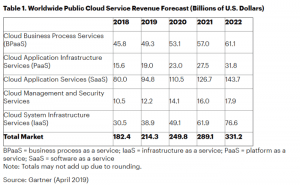 With this deal, Microsoft and Oracle, the No. 1 and No. 2 software companies in the world, have done something exceptional, and it’s not all about beating AWS (though that’s certainly a part of it).

By making a choice to help their customers, they’ve amplified their own value and further cornered the enterprise IT market, from database and cloud infrastructure to Software-as-a-Service (SaaS), which is the biggest part of the cloud market.

Let’s dive in first with the actual news from the press release:

On its face, enterprises can now simplify migrating their business application workloads to the cloud.

Why is this important? Well, an aggravating conventional wisdom — with some truth to it — has developed in IT circles that you always want to “unify your stack.” Simply put, that means keep all your Microsoft business apps on Microsoft databases and clouds and keep all of your Oracle apps on Oracle databases and clouds.

The thinking here is that everything will run better with this kind of set up, resulting in less data lag and crashes that give the IT department headaches. Also, the IT department won’t have to spend a lot of time and money re-architecting data for mix-and-match app-database-cloud setups.

But this unify-your-stack mentality has really complicated how companies go about selecting applications, databases, clouds and planning their technology roadmaps. That’s because it’s all interconnected. So, a lot of all-or-nothing choices have been made about technology decisions that weren’t always the best for the business. More importantly, a lot of companies have preferred sitting on the sidelines, not making decisions at all, because the choices were not optimal.

To amplify this struggle, the head of IT for a global consumer products company recently told Vigilant: “I don’t think we would ever entertain running Oracle (apps) on Microsoft or AWS (clouds).”

Now, however, Microsoft and Oracle have erased concerns like these, as explained by IT leaders quoted in the joint MS-Oracle press release:

By simplifying life for their customers, Microsoft and Oracle have done themselves a big favor, too. Let’s look at why:

There are two primary ways to store and manage data that powers business applications — in a data center or in a cloud (which is really just somebody else’s data center that your enterprise doesn’t have to operate). 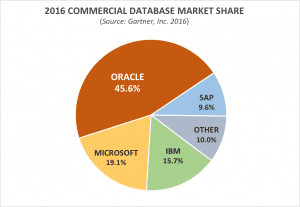 For decades, Oracle has been the No. 1 leader in database technology, with 45+% market share, competing directly against Microsoft, which has long been No. 2, with 19+% market share (Data from seekingalpha.com). Most enterprises today have both Oracle and MS SQL Server databases in their data center.

Even as this database sector is foretasted to decline, as companies move to cloud infrastructures, it’s important to note that Oracle has remained No. 1 in this mission-critical database segment for a reason: their databases are widely regarded as extremely efficient, powerful, reliable, and secure. Oracle is the database king.

Now, let’s take a look at the cloud infrastructure market, which is, again, just somebody else’s database center. 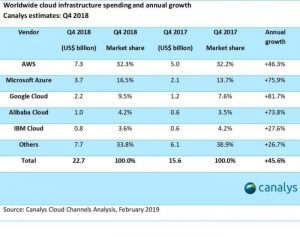 Azure mentioned in its press release that it is the “cloud of choice for the enterprise, with over 95% of the Fortune 500 using Azure.” When looking at the broader market, AWS remains the leader, but Microsoft is second (and growing faster than AWS, according to Gartner and Canalys), with other companies, such as Oracle and IBM, trying to carve out respectable slivers of the pie.

Enterprises are the key to future growth for these #CloudWars competitors. So, getting companies that are already using popular Oracle databases and business applications, such as E-Business Suite, PeopleSoft or Hyperion, to move to either Azure or Oracle clouds running Oracle databases is extremely attractive.

If you were in charge of running a cloud infrastructure service, you’d want the databases powering your cloud to be the most cost-efficient, powerful and reliable databases you could get. It would mean that your cloud could run faster, with less data lag for your customers and more reliability.

In essence, you’d probably want your cloud to be powered by Oracle. (Microsoft, Oracle’s longstanding database competitor, probably knows that better than anyone).

Databases are an important part of enterprise IT architectures, whether they are on-premise, in the cloud or, as is increasingly likely, a hybrid database-cloud setup. This is likely why Amazon signaled in its 2018 Letter to Shareholders that its getting into the business of databases with this note: “we heard loudly that companies felt constrained by their commercial database options and had been unhappy with their database providers for decades.”

An observer might have assumed that Microsoft Azure was running its own SQL Servers in its data centers. But Azure cloud running premium market-leading Oracle databases? That’s some powerful “Wow” business news in IT-land.

Which takes us back to the Microsoft and Oracle press release:

“By enabling customers to run one part of a workload within Azure and another part of the same workload within the Oracle Cloud, the partnership delivers a highly optimized, best-of-both-clouds experience. Taken together, Azure and Oracle Cloud offer customers a one-stop shop for all the cloud services and applications they need to run their entire business.”

The cloud business isn’t all infrastructure, of course, and this deal could eventually amplify the strength of Microsoft and Oracle in the Software-as-a-Service (SaaS) market, too. The SaaS market is actually the biggest part of the cloud market, forecasted by Gartner to reach $113 billion in 2021, compared to $63 billion for Infrastructure-as-a-Service (IaaS).

What does it mean if Microsoft and Oracle make it easier to get to step No. 2? Logically, it should mean that they’ll be better situated to earn the business if and when the enterprise moves to step No. 3.

In the SaaS market, Microsoft is already No. 1 with market share over 15%, according to the Synergy Research Group. Oracle is No. 4 with market share approaching 10%, just behind Salesforce and Adobe, but ahead of SAP. Microsoft and Oracle are already fast movers in this group, too, with annual growth rates above 40%. (AWS doesn’t yet play in this market).

If you’re a CIO evaluating SaaS applications, you may now be giving Microsoft and Oracle a consideration edge, as integrating and connecting data from the same vendors is usually easier, and therefore less expensive. What’s more, this new partnership may allow an enterprise to squeeze even more time and money out of their current investments before making a move to SaaS.

So this bold move by Microsoft and Oracle was an unexpected twist for sure, but it will be even more interesting to see what comes next in the #CloudWars.